Hi it’s Liz…I was shocked when I read some of these odd facts about Canada.  If you should ever visit the Great White North …these might be Deal Makers or Deal Breakers! 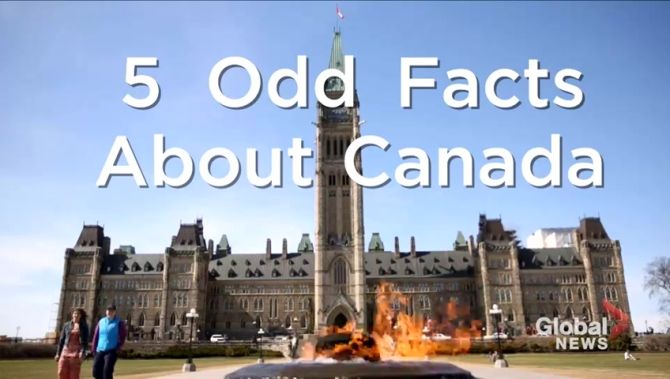 Most people know that Canada has the most lakes in the world, produces more maple syrup than any other country or that our official number is 1-800-0-Canada. But what about lesser known facts about Canada? Here are five things about our country you might not know.

All Santa Letters come from Canada

Whether you mail Santa a letter from New Zealand or Zimbabwe, it ends up in Canada. Santa’s official address – Santa Claus, North Pole HOH OHO is owned by Canada Post. Volunteers reply, as Mrs. Claus, to millions of letters each year in over 30 languages. In 2010, Jason Kenney, then Citizenship and Immigration Minister, also declared Santa a Canadian citizen.

Canada has issues with gravity

Areas around the Hudson Bay region have lower gravity than other parts of the world. Scientists believe this is caused by a combination of convection occurring in the Earth’s mantle and the Laurentide Ice Sheet, which left an indent on the area after it melted 10,000 years ago. The indent has been slowly rebounding, scientists say, and could be responsible for the “missing” gravity.

Manitoba has a lot of snakes

Want to see more snakes all at once than anywhere else in the world? Head toManitoba’s Narcisse Snake Pits. Twice a year, tens of thousands of red-sided garter snakes head to the surface of their winter dens to mate. The ritual lasts two to three weeks before they head off into local marshes.

Canada declared war on Japan before the U.S.

Hours after Japan attacked Pearl Harbor on Dec. 7, 1941, Prime Minister W. L. Mackenzie King declared war on them. It wasn’t until Dec. 8 that the United States and Great Britain joined them.

Canadians eat a lot of mac and cheese (a lot!)

When it comes to the consumption of boxed mac and cheese, or Kraft Dinner as it’s better known, Canadians eat a whopping 55 per cent more of it a year than Americans do. Out of the 7 million boxes sold weekly around the world, Canadians purchase 1.7 million of them. Former Prime Minister Paul Martin listed KD as his favourite food and Prime Minister Stephen Harper has admitted to cooking it for his children.

This web site is not intended for users located within the European Economic Area.