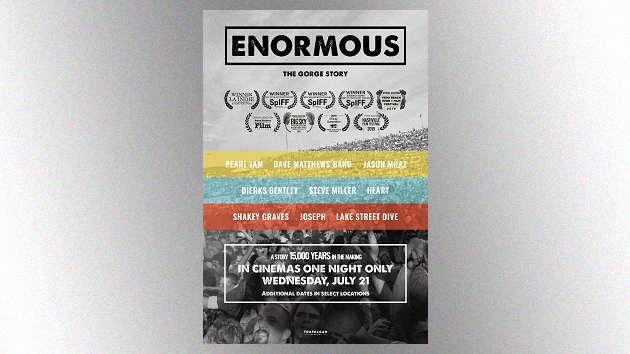 Enormous: The Gorge Story, a new documentary about the history of the popular Washington State concert venue The Gorge Amphitheatre, will get its theatrical release as a one-night-only event on July 21, with additional screenings also slated to take place in select locations.

The film includes interviews with various artists, including Steve Miller, Pearl Jam guitarist Mike McCready and Dave Matthews, who share their recollections of playing at the beloved venue situated in rural eastern Washington.

The screenings also will include bonus interview footage with several well-known artists, five short documentaries about The Gorge, and a blooper reel featuring McCready, Matthews and a number of the musicians that appear in the film.

In a trailer for Enormous: The Gorge Story, Miller notes of playing at The Gorge, “The shows were always great, were always sold out. We enjoyed the audience and the atmosphere of it.”

The promo also includes a clip of McCready explaining how attending a Stevie Ray Vaughan show at The Gorge inspired him to pursue playing music seriously.

Additionally, Rolling Stone has premiered a clip from the film featuring McCready talking about Pearl Jam’s 1993 show at The Gorge with Neil Young.

“With The Gorge reopening this July, after more than a year of shuttered theaters, music venues, and a dire lack of live communal experiences, Enormous: The Gorge Story couldn’t be releasing at a better time,” says the film’s director, Nic Davis. “Our film is about the power of place. And the power of community. And how some great music got millions of people from around the world to dance together on a patch of rural farmland.”

Enormous: The Gorge Story (Official Teaser #2) from 4:08 Productions on Vimeo.