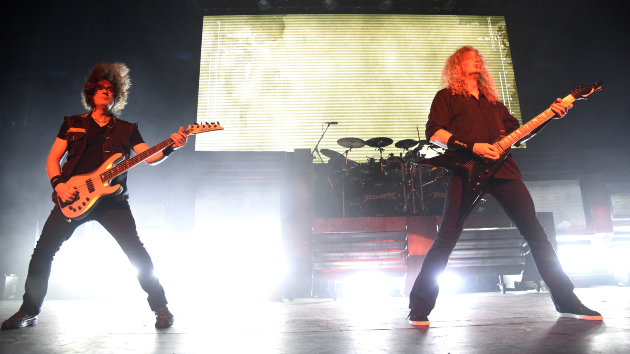 You won’t be hearing David Ellefson on the next Megadeth album.

Frontman Dave Mustaine confirms the bassist’s parts on the upcoming studio effort, which he’d recorded prior to his dismissal from Megadeth in May, will be rerecorded by somebody else.

“We’re gonna have someone coming in in a couple of weeks to replace the bass tracks that we had,” Mustaine says on his Gimme Metal online radio show. He adds that the process “should be relatively quick,” since the potential replacement is a “stellar bass player.”

“Hopefully this will be an ongoing thing after the recording,” Mustaine says. “Or we will find someone prior to the recording that will be our permanent guy going forward.”

Ellefson’s departure from Megadeth came after a sexually explicit video of him interacting with a young woman leaked online, leading to allegations he was grooming an underage girl. Ellefson acknowledged the video in a since-deleted Instagram post though denied the other person was underage, characterizing the video call as “private, adult interactions.”

Megadeth’s new bassist will make their debut on the live stage during the band’s Metal Tour of the Year with Lamb of God, Trivium and In Flames, which kicks off in August.