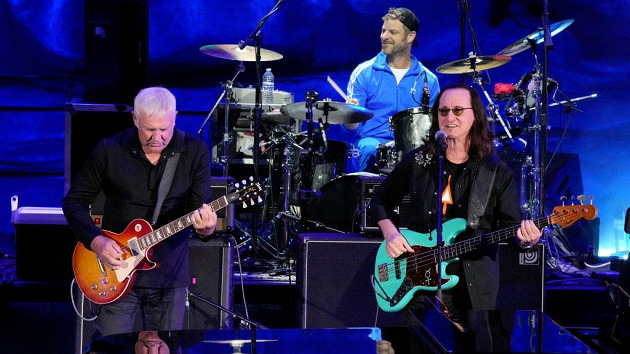 Lee and Lifeson made a surprise appearance, joining their longtime friends Primus for a performance of Rush’s classic 1977 song “Closer to the Heart” while South Park co-creator Matt Stone sat in on drums.

This marked the first time Lee and Lifeson have played together in public since longtime Rush drummer Neil Peart‘s death from brain cancer in January 2020.

Before Lee and Lifeson hit the stage, a video featuring South Park-style cartoon
versions of them was shown in which they humorously discussed what they could do to help Stone and South Park co-creator Trey Parker celebrate the 25th anniversary.

“[Should we] send them some free Rush beer?” Lee poses. “Or even worse, we could show up and jam with them, eh?” Lee and Lifeson then hit the stage, to wild applause.

Rolling Stone reports the concert included full sets from Primus and Ween, and Stone joined in on various instruments for renditions of original South Park songs.

The show was filmed for South Park: The 25th Anniversary Concert special, which premieres on Comedy Central this Saturday, August 13, at 10 p.m. ET and will be available to stream on Paramount+ starting August 14.

Stone is a lifelong Rush fan, and the band has been referenced in South Park numerous times, including the 2011 episode “Royal Pudding” that features the prog-rock legends performing at a vigil after the princess of Canada was kidnapped.